Brielle is 15 years old and a Global G.L.O.W. participant from Los Angeles, California. This is her essay in her own words:

When you hear the phrase “body image”, what is the first thing that comes to your mind?

To me, I think of two things – appearance and health. My immediate reaction is appearance as the phrase triggers a feeling within me to look at myself and see if I’m happy with the way I look or even further if those around me are happy with the way I look. On the reverse side of it, being in a competitive sport as an athlete, I immediately correct my initial feeling with how I or others see myself to how my body feels. The two-word phrase in itself is more complex than I can explain. It can mean a plethora of things for each of us and affect us in different ways as well.

From my experience, our society places a huge emphasis on the “appearance” part of body image, rather than the “health” aspect of it. As a result, people view body image as what is seen rather than how one feels and how healthy one is. Thus, for most teenagers, body image is how they see themselves compared to the idealized body type that they desire. More than ever, teenagers are getting fillers and plastic surgery, clothing sizes are getting smaller, and dangerous diets are constantly popping up. With most teenagers having access to social media, there is really no way around “not” being exposed to unrealistic body standards. It’s just become the norm in our everyday lives. We’ve become so numb to it that our self-worth is directly tied to the “appearance” part of our body image, rather than being happy with who we are, in our own skin.

As a teenager like myself, there is an added layer, as we are growing, developing, and trying to understand the changes in ourselves while trying to figure out if we fit into a specific mold that makes us feel “included” and “accepted”. We not only have to struggle with the unknowns of our individual body development but also have to think about how our bodies should look. We find ourselves looking up to models and actors who have a team of people that help them look the way they do, and many times are photoshopped and altered to look a certain way that is not even realistic.

For instance, when I was in middle school, some of my peers often compared themselves to models and how they wished to have the “dream” body like the models they idolized. They would say, “I think I should try losing weight,” or, “if I’m skinny enough, maybe I’ll look like her”. A few of my classmates even went to a gym to make sure they got in their cardio and skipped meals to ensure that they would lose weight. This was in sixth grade. When they did lose weight, they were told that they looked prettier, which made them continue the unhealthy cycle of exercising while skipping meals. Looking back, what my classmates and I failed to recognize was how old these women were. They were in their 20s and we were only 12 years old, still blossoming and not realizing that our bodies were perfectly fine as they were. Although very young, my classmates became the product of what they saw and heard. Unfortunately, those idealistic beauty standards that bombarded my classmates’ social media feeds did not come with disclaimers. As a result, they believed that looking like a 20-year old model was possible when in reality, it was an unattainable goal for pubescent teenagers who were beginning to develop into their own.

The Role of Diet Culture

A huge problem in our society is that companies use the nativity of youth for profit. They use advertisements to create insecurities for girls and in turn profit off of it without any accountability. Diet hacks and quick workouts are constantly featured in our feeds on social media, encouraging unauthorized weight loss to show young girls that they would feel and look better and happier than they are now. They are the instigators of why body image has such a negative connotation rather than a positive self-reflection. More than ever, teens are struggling with their bodies because they are not being shown realistic body standards. Many don’t see their body types in advertisements or in media, and if they do, they are shown in a poor light.

Due to these expectations, body shaming has been normalized. If they don’t fit the beauty standards of today, not only are they self-conscious, but they are also shamed by their peers, family, and friends. Inevitably, they develop anxiety, stress, and even depression. A once-happy young girl turns into a sad teenager, who feels that they have no worth because they are not accepted for who they are. I know this too well because I’ve witnessed my peers go through this and see the consequences of it. The effect that companies have on our body image is alarming but what is even more disturbing is that they are free of any responsibilities. When a teenager is crying in the counselor’s office or a mom is desperately crying for help when her child develops an eating disorder, they are not in those rooms, they are free from any implications. They did exactly what they set out to do by creating unrealistic body expectations and profit from it. At what cost? A broken child, a broken family, and a broken society.

How to Create Change

Fighting against these multi-billion dollar companies to stop profiting off of young children may be an impossible task, as they say, “money talks”. However, we as a society can collectively make changes together to combat companies from portraying unrealistic body standards to our youth. We need to hold social media companies accountable, we need to hold our government accountable, we need to educate one another on positive body image by focusing on the “health” aspect of it, and we need to partner with media companies to create advertisements that are inclusive of what our society really looks like. Only then can we start to build our confidence and self-esteem to accept ourselves and focus on what positive body image really is. I also feel that schools have an obligation to be one part of the solution to create awareness about body image. By educating the youth in the classrooms starting at a young age, they will be given the tools to understand and feel empowered to know that body image is not what they should look like based on ads that they see and rather how they feel about themselves through being comfortable in their own body and staying healthy.

“We as a society can collectively make changes together to combat companies from portraying unrealistic body standards to our youth.”

While body image can be an uncomfortable subject to talk about, the only way that we can instill positive body image is to talk about it more. We should be able to openly discuss it in class, with our friends and family, or even with our neighbors. It shouldn’t be something we stay quiet about or shy away from. If my classmates and I had more knowledge about body image when we were in sixth grade, we could have been more supportive to those that struggled with feeling rejected because of how they looked. As a high schooler now, I am more confident about what body image means to me. I still see different things on social media that can make me feel one way or another, however, now I’m aware that those are unrealistic standards that are not even met by the models themselves. While I’m still young and have a lot to learn, I feel that if we can start identifying body image with how we feel about ourselves through individuality rather than what is molded by the media, we can change the outlook of how body image is portrayed to our youth and society. 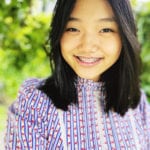 Brielle is 15 years old and a Global G.L.O.W. participant from Los Angeles, California.